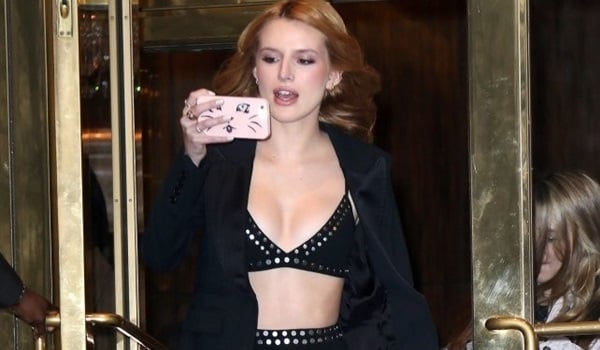 Bella Thorne heads out in public in just a bra, after forgetting to put on a shirt in the shockingly thoughtless photos below.

Before you get excited about these exhibitionist Bella Thorne photos just remember that this girl is 17-years-old, and thus well past her sexual prime and quickly closing in on middle age. In fact just looking at these pics one can already begin to see signs that Bella’s boobs are starting to sag, as gravity takes its awful toll.

As if any further indication was needed that Bella Thorne is fast becoming an old maid, forgetting to wear a shirt like this is a clear sign of either the early stages of dementia or Alzheimer’s. No doubt by the time Bella turns 21 she will really struggle to get dressed, as she becomes a slobbering shell of her former self. However, by that point it will probably be for the best that Bella fades away, as she will have lost all utility as a woman long ago when her dried up uterus prolapses out of her ancient lady box.