John Edwards Gets Engaged On Top Of Wife’s Grave 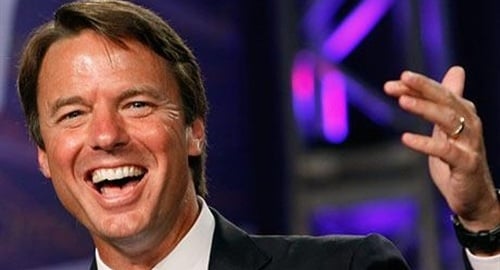 Reports are surfacing that one time Democratic Presidential candidate and Senator John Edwards is engaged to his longtime mistress Rielle Hunter.

John Edwards unfairly received heavy criticism from the Zionist controlled media for taking a mistress while his then wife Elizabeth Edwards battled cancer. The high and mighty media pundits acted like if their car was in the shop they wouldn’t go pick up a rental.

Elizabeth Edwards finally passed away early December, allowing John and Rielle to get on with their lives, and get on with it they did.

According to our sources at “Stonewall Memorial Gardens”, late last night an obviously intoxicated John Edwards and Rielle Hunter made their way over to his dead wife’s grave. They proceeded to make out on top of the grave before John dropped to one knee and proposed marriage to Rielle. The love birds then proceeded to kiss and grope each other, followed by John pressing Rielle up against the tombstone to dry hump her.

The newly engaged couple then hurried home to continue the celebrations further. One graveyard worker claims to have heard John tell Rielle that,

“We can f*ck in my bed tonight. I had the maid burn all of Elizabeth’s belongings, so there won’t be any of that awful cancer smell.”

As we head into 2011 we here at CelebJihad would just like to congratulate John Edwards and Rielle Hunter on their engagement. The new year brings many new and exciting changes, and we are glad to see that John has embraced change so enthusiastically. For as it says in the Qur’an “out with the old and in with the new”. Allahu Akbar!