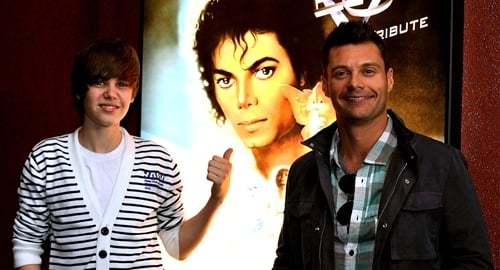 Justin Bieber obviously has no respect for the dead. Just look how he enjoys taunting Michael Jackson’s ghost with his taut nubile frame, and boyish good looks.

Michael must be ripping his hair out for dying before hearing of Justin Bieber, and inviting him to one of his famous all night mentoring sessions at Neverland Ranch. Michael Jackson would of had Justin Bieber’s pants around his ankles and they’d be playing “cave explorers” faster than you can sweet statutory.

To add insult to injury Justin Bieber is hanging out with noted closet case Ryan Seacrest now instead of The King of Pop. I highly doubt that Ryan has the ability or inclination to take advantage of Justin’s childlike body, considering he appears to be a limp-wristed power bottom.

No, only Michael Jackson would have had the experience and know how to give Justin Bieber exactly what he has coming to him. It is a damn shame that now he never will.