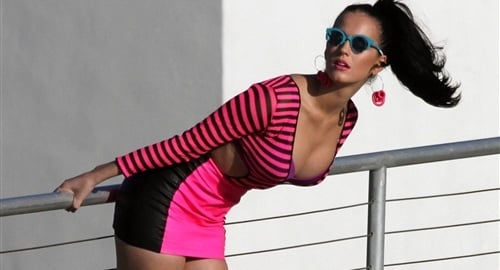 The Pro-Suicide movement has just got a huge boost thanks to musician Katy Perry agreeing to be their spokesperson to promote the positive side of suicide.

“I just feel that suicide gets a bad wrap.” said the singer, “I mean what is so great about living? Lots of people do that. I say be an individual don’t follow the crowd!”

The suicide rate, especially among teens, has dropped in the last couple years, and this trend disturbs Katy Perry.

“I just hate to see the kids today miss out on an important rite of passage. I mean everyone should at least try killing themselves once. Lets face it, if your life sucks when you are 15 or 16 years old it will probably never get better, so what do you have to lose?”

To get her pro-suicide message out to her fans, Katy Perry will be appearing in a commercial in which she showcases the fun and sexy side of taking one’s own life. As you can see in the pictures below Katy Perry is wearing a revealing outfit while playfully leaning over the edge of a balcony 50 feet above the pavement.

“If I just get one of my fans to accept the hopelessness and utter meaninglessness of life, then I did my job.” said Katy. Let us hope Katy Perry’s suicide campaign touches a lot more than one.