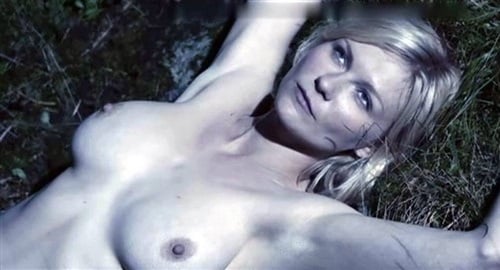 Believe it or not this is not another picture of Michael Jackson’s corpse, it is actress Kirsten Dunst topless for her new movie.

Of course as you can see here this is not the first time Kirsten Dunst has exposed her nasty tits to the public. However, it appears as though Kirsten has finally wised up and realized gravity is not her friend, so to keep her tits from dragging on the ground in this topless photo, Kirsten Dunst is laying on her back with her arms over her head.

This topless picture of Kirsten Dunst is a vast improvement over the previous one to be sure. However, Kirsten Dunst’s breasts are still nothing she should be flaunting as they still appear to be shamefully misshapen and saggy. Kirsten Dunst definitely remains one of the most unself-aware and unsexiest whores in all of heathen Hollywood.