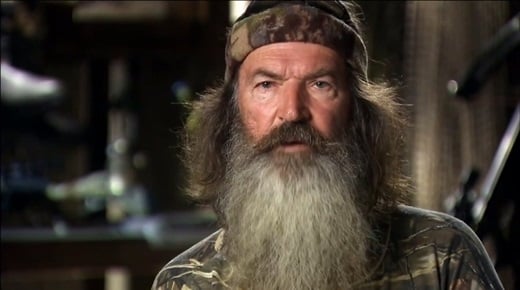 Pious Muslim Phil Muhammad Robertson from the hit A&E show “Duck Dynasty” has been arrested on charges of hate speech.

Brother Phil made the horrendous mistake of daring to suggest that a man’s anus is not as sexually appealing as a vagina in the flamingly gay United States of America. Below is Robertson’s exact quote:

It seems like, to me, a vagina — as a man — would be more desirable than a man’s anus. That’s just me. I’m just thinking: There’s more there! She’s got more to offer. I mean, come on, dudes! You know what I’m saying? But hey, sin: It’s not logical, my man. It’s just not logical.

Since homosexuals make up nearly 99.5% of the US population (it is not called “the land of the fags and home of the gays” for nothing), authorities were forced to act and took Phil into custody early this morning.

One can only hope that Phil stands by his belief that he should be allowed to hold the opinion that heterosexual intercourse is preferable to packing fudge in a man’s ass, even while his interrogators prance around him, repeatedly probe him for contraband, and tickle his nipples with feathers.