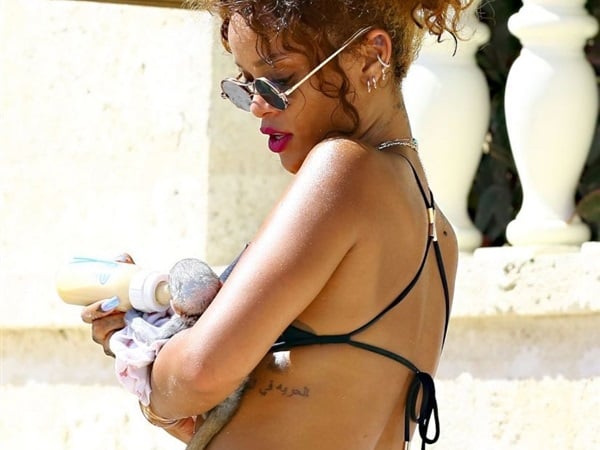 Despite Rihanna’s recent weight gain being attributed to her renewed love of pig’s feet and full sugar Kool-Aid, it appears as though she was actually pregnant this whole time. As you can see in the pictures below, Rihanna was photographed in a bikini holding her newborn baby just days after secretly giving birth back in her homeland in the jungles of Barbados.

It is anyone’s guess as to who the father of Rihanna’s baby is, as there are literally thousands of potential candidates. However, after seeing the baby in these pics it is clear that it bares a remarkable resemblance to rapper Lil Wayne.

Regardless of who the baby’s daddy is, it looks as though Rihanna isn’t going to let the little bundle of burden slow her whoring ways down. For not only is Rihanna already prostituting her newly thick frame in a bikini, but she appears to be leaving her child in the very incapable hands of a gang of rough looking lesbodykes. This is the same gang of dykes that raised Rihanna, making her the tremendous whore that we know today.