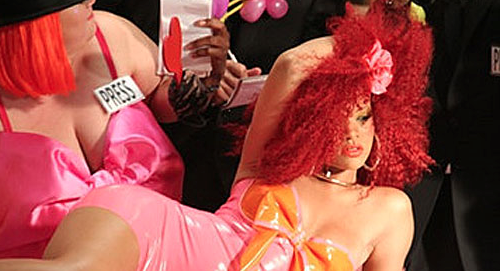 Rihanna might not be the chaste virgin we thought she was. After being straightened out by Chris Brown, one would have thought that this wonderful American pop star would keep it clean, but to no avail.

Which is horrible, because us loyalists, despite hating all things American, especially disposable pop stars that dress like harlots (see above), STILL love that “Umbrella” song. Sometimes, we’ll just be walking around the cave, feeding the hostages, and for no reason at all, Muhmad will just go “…ella, ella, ella.” It’s totally hilarious!

However, it shames and saddens us that she has been confirmed as a camel toe licking lesboqueer. A female model just released a book that includes this disgusting lesbian sex scene between herself and Rihanna.

“A friend of mine had introduced me to this Barbadian female pop/R and B artist a while ago. I had heard her music several times and was a fan of her unique sound. I jokingly told him that I want to talk to her. He told me on the sly that he wasn’t sure if she was into women but that he would confirm. We exchanged contact and it went on from there. I wasn’t over my ex, but talking to her helped. She was beautiful, wore her hair short with blonde highlights and her style was creative. I wasn’t sure I could take her serious, so I took it one day at a time. We instantly had a connection. I could listen to her for hours discuss the media, music and fashion. She had opened up and told me about her difficult past, how she went through various trials and tribulations. Sex came up immediately, she was a freak. I wasn’t in a sexual mood, I was on my spiritual journey and sex wasn’t a part of my plans, it just wasn’t important to me. However that didn’t stop anything. She went down and gave me head, I didn’t stop her. She bragged about the way I tasted and then all of a sudden after I came she snapped out of it and would get right back into her music. It was like clockwork. I never went down on her, she was more interested in pleasing me.”

The worst part about Rihanna’s lesbianess is that we were totally going to make “Rudeboy” our battle hymn, but now we’re so shocked that we’re probably going to make it a Ricky Martin song or something. We couldn’t find anything objectionable about him, and he is definitely a lady’s man!