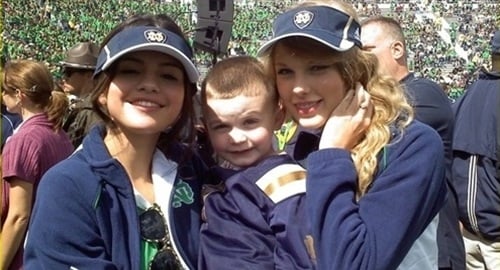 No one knows for sure when the Catholic Church lost its moral standing in the world, but it was probably about the time it stopped burning willful women for being witches. Now the Church is overrun with radical liberals who tolerate all sorts of depraved acts like teaching girls to read and dancing.

Selena Gomez and Taylor Swift know that the Jesuits at Notre Dame are corrupt enough to accept their lesboqueer lifestyles, so naturally they decided to go hangout there.

Honestly I wouldn’t be surprised if Selena and Taylor spent the majority of their time at Notre Dame sodomizing each other with a cross, and using holy water as lube. If they did I guarantee they would not have been lashed, put in the stocks, or even lightly tortured by their Jesuit hosts.

No wonder Islam will soon pass Christianity as the largest religion in the world. Christians now a days lack the moral fortitude to punish those who are different and it sickens me!

Enjoy your sweet lesbo love making while it lasts Selena Gomez and Taylor Swift. Soon the armies of Allah will conquer the infidels and you will feel the full moral force of Sharia law. Allahu Akbar!