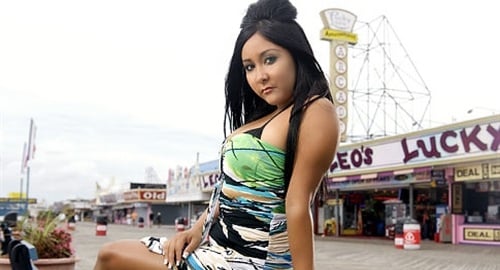 Nicole Polizzi, better known as “Snooki” from the hit MTV show “The Jersey Shore”, decided to moon a father and his young daughter while they were out enjoying themselves yesterday.

As you can see in the gif below, Snooki approached the father and wide eyed innocent child and stared at them for a second. When the father reached out his hand in a friendly gesture to Snooki, she turned around and presented her ass spreading her cheeks.

No one can really say for sure whether this was a malicious act by the Snooki or some sort of mating ritual, as her behavior is still being studied by scientists. However, what is for certain is that Snooki showing her anus to this young girl has robbed her of her innocence and will force her into a life of drugs to try and forget the horrific scene she just witnessed.