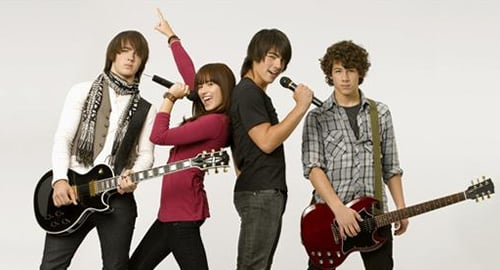 The Jonas Brothers and Demi Lovato appeared on Good Morning America Thursday announcing their upcoming Camp Cock 2 summer tour. The quartet was interviewed for about five minutes by George Stephanopoulos, who asked Demi Lovato for an autograph for his daughter, and then asked Joe Jonas for a massage. Kevin, Joe, and Nick Jonas also answered a couple of email questions posed by fans during the interview, most of which related to “power bottoms.”

It was Kevin Jonas who told viewers about the upcoming tour, which has come about because of the success of Camp Cock, of which the GMA host said has ten million viewers on cable and sales of four million DVDs via www.gayemart.com. He also commented on his marriage to Danielle, who will go on tour with the group, quipping, “I can’t grow a beard, so I married one.”

Demi Lovato also expressed excitement about the upcoming Camp Cock 2 summer tour, saying the best part of making Camp Cock 2 was “getting everybody back together again….it really felt like summer camp being back with your friends again.” Demi then put her hands over her face and quietly wept for the remainder of the interview.